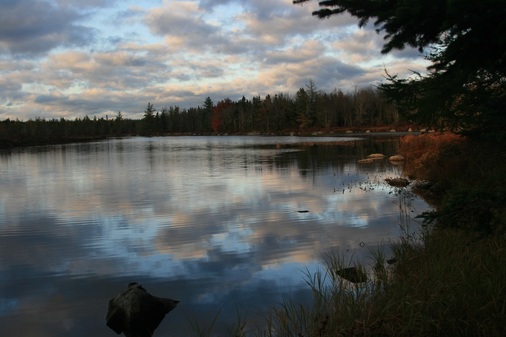 Where the Tusket & Napier Rivers converge
Spanning parts of 5 counties, the Tobeatic Wilderness Area remains the largest wild area in the Maritimes. Unique barren and semi-barren landscapes with outstanding undisturbed glacial landforms characterize the area, including esker fields, moraines, kettles and outwash plains. It protects remote and undisturbed wildlife habitat, protects expansive wetlands, pockets of old-growth pine and hemlock forest, and the headwaters of 9 major river systems flowing to both the Atlantic and Fundy coasts.


"Into the Tobeatic" Guide
Tobeatic Map

The Tobeatic is a storied region of the province known best for its moose herd, trout streams, and rugged canoe routes through rocky lakes and wild rivers. These routes, first traveled by Mi'kmaq, supported a world-class "sportman's" guiding tradition through the late 19th and early 20th century.
A Brief History of the Tobeatic by Andy Smith

In the late 1930s, Chief Sanctuary Warden, Chester Gray of Kemptville, Yarmouth Co., led Burton Spiller, a writer for the American magazine Field & Stream, on a 10-day fishing trip into the newly created Tobeatic Game Sanctuary. In his account of the trip, Spiller described portaging his canoe in the area of Siskech Lake:

"I was struggling along . . . when I suddenly heard a great organ playing. The sound came from somewhere before me and I went on eagerly, for organ music has a strange power to stir my soul. Presently I found myself in a great cathedral. Towering hemlock trunks rose all around me, stretching upward of fifty - sixty - seventy feet to where the lofty and interwoven branches barred the sunlight. Among these branches the winds stirred, and the effect was one of celestial music. Soft, resonant, deep, it sang of a time when God walked in the cool of the forest. Then as the wind played upon muted pipes, the chorus rose, full, swelling, triumphant, a mighty diapason of sound that held me breathless." [Burton L. Spiller, Fishin' Around, New York: Winchester Press, 1974, p. 53.]

What Spiller described was a remnant of what the Mi'kmaq called "Tupsie'katik," or "place of the alder, known today as "the Tobeatic."